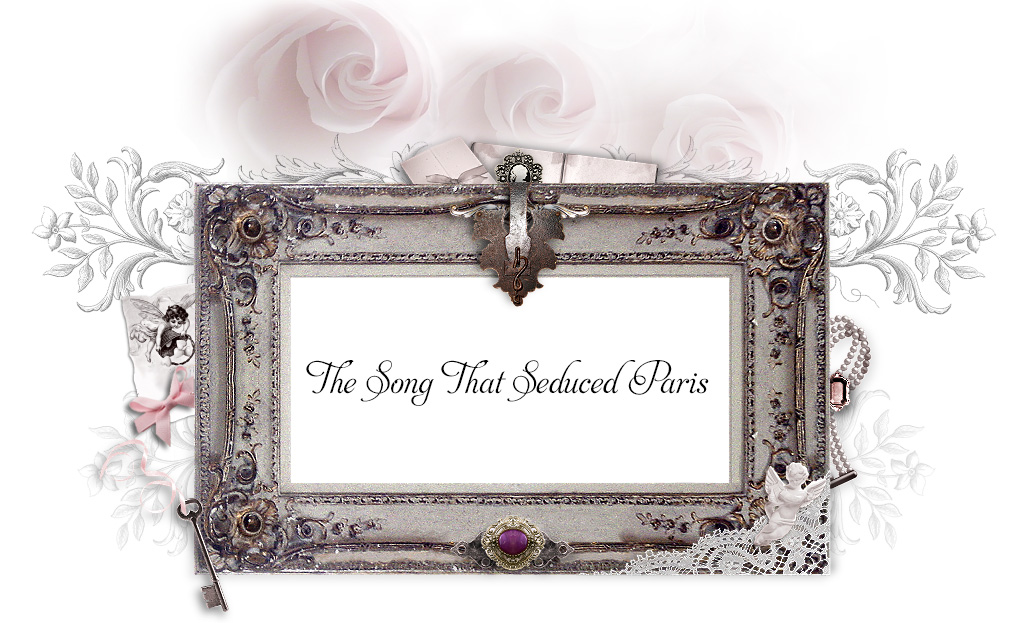 The Song That Seduced Paris

Are we starting fresh today?

Or is Time looking for us and the magic that we made . . . If this were the sixties, the French member of Bel Homme would be called, “The Cute Beatle.”

When Gabriel Grenier joins the group, he does so as the most accomplished and famous celebrity in France since England shared its Paul McCartney with us. His resume is even more impressive than Paul’s, though.

The only offspring of a French diplomat and his socialite wife, Gabriel has been a child TV star, a teenage singing heartthrob, a successful songwriter, a record producer, and lately, a French movie action hero. He’ll be writing songs for this new endeavor, too. His style is romantic and polished, and it will be the bridge between opera and pop. Gabriel will have to deliver the goods for this project to succeed.

But joining Bel Homme is not what he bargained for. He’s now just one member of a very accomplished group, and he’s feeling the repercussions of uncertainty for the first time in his life. He may be wildly rich and successful, but he doesn’t have the classical training of the other three men. He’s never had to fit in with the status quo. He’s always established it for everyone else.

He’s also the adult object of desire of any woman he chooses to be, but he’s never met an all-American girl like Annie before. When Annie and Gabriel meet, sparks fly like heat-seeking missiles cruising out of control. Still, she does not immediately bow down to the god Gabriel has been raised to believe he is. For him, the impossible has already happened: this female, this foreigner from the free world, is capturing his heart. Even with all the women he’s known and all the places he’s been, Gabriel has never met someone like her.

And Annie, a former music teacher from East Grand Rapids, Michigan, has surely never known a man like this one. Through her Aunt Harriet’s connections as the personal assistant of music mogul, Teddy Wilson, Annie gets the job as Teddy’s special emissary for this new undertaking. But Teddy wants nothing personal mucking up this gig, and he forbids the two to get involved. Gabriel has never had to answer to anyone, and he’s not sure he wants to start now. Annie is still mourning her deceased husband, and she’s not sure of anything.

In this scene, which takes places at Bel Homme’s private music compound located on Teddy’s country estate in Royal Tunbridge Wells, England, her first challenge is to reassure Gabriel that his pop-style voice is a crucial component to the future success of this venture. She needs to get him to realize he wasn’t hired to sound like a classically trained opera singer. He was hired because his graceful voice and his commercial brand are the pivotal tools that will give Bel Homme their unique sound.

And even though they’ve just met, it’s already started for the both of them: the beginnings of an inevitable, lasting love affair . . .

Gabriel needed air. He slid the door open. “Come walk with me,” he said, stepping out and hoping she would.

Anne bounced forward and fell in beside him. They kept a steady pace and moved through the grass and weeds. The breeze this morning was soft, the sky a bright blue, and the sun shone down and warmed the top of her head. This would be pleasant even without him strolling beside her. Then he speeded up and took long-legged strides, his big hands tucked into his front pockets, the stretch pulling the denim tight over his masculine contours.  He winced when the bandage tore away from his knuckles a bit. His dark brown hair lifted and fluttered, messily blowing into his eyes and over the collar of his short-sleeved shirt. Everything about him was a temptation, and she had no idea how she was going to end this accelerating wealth of heart-stopping attraction. “Do you like it here?”

Gabriel looked around, admiring this English countryside in the picturesque county of Kent. “I do. Very much.”

“Me, too. I feel welcome here.” Her heart skipped when he took her hand in his uninjured one and entwined their fingers. His hand was warm and had a gentle strength about it, and she squeezed, but he wouldn’t look at her. “What’s it like being one of the biggest celebrities in France?”

Annie softened. What an odd word to choose for the first one. “Is it fun?”

“Always. I don’t want a job that teaches me nothing.”

Illuminating, she thought. “So the easy choices don’t interest you.”

“Not at all. Even when I was young, I had an old man’s pride to balance a young man’s romantic spirit, and the belief I was given a gift that shouldn’t be squandered.”

“How old were you when you started acting?”

“So young. Did your parents force you?”

“No, it was me who forced them. From the time I was born, I’ve been denied nothing I’ve ever wanted, and I wanted to perform.”

Annie shivered at the thought of his elite birthright. She studied his profile. In this revealing light, he looked younger than his thirty-odd years, and a speck of that little boy was there behind the faint lines around his eyes. He was grown, but he still felt the weight of delivering the goods. She wondered something. “Did you go to a regular school?”

Gabriel shook his head. “Non, private tutors always. Teachers whose only job was to educate me in my lessons.” He smiled down at her. Her petite figure was darling in a rosy cropped top, and the sight of that bare expanse of tummy made his balls tighten and his cock stir. He definitely was no longer impotent. “I did not miss anything, chaton, except perhaps having a teacher who looked like you.” And then she blushed again. He couldn’t remember the last woman he’d been with who was actually able to blush. “You are like a rare, innocent flower.”

“And you’re nothing but a sweet talker,” she teased as she brushed up against him and their arms rubbed together. His skin was hot and soft, the hair there silky and ticklish. On the outside, he seemed ideal. What was going on inside? “I want you to tell me what’s wrong,” she said. They were getting closer to the trees. Out here, they were in the open. The forest would close them in. Maybe its cover would allow him to share his secrets, so she headed that way. “Don’t worry about how it looks or how it might sound.”

Gabriel glanced up when a flock of birds flew overhead. This place really was soothing. So was the woman holding his hand. “How I look to the outside world and how I sound is all I always think about,” he admitted as she led him into the shade of the woods. Here it was nicer. Intimate and protected. The air was cooler, and everything smelled vibrant and fertile. He stopped them and turned. She was unlike any woman he knew. “I’m different with you.”

“What do you mean?” she asked, feeling a sexual heat purl up her spine. When he aimed his charm and his energy at her, she found it hard to breathe.

“I’m … normal,” he said. A leaf fell from a tree and landed on the rise of her breast. Good choice. That’s where he’d like to be. “I’m not my image or my reputation. I’m how I feel myself to be inside.” He couldn’t stop looking at that leaf. It swayed with the rise and fall of her lungs, still clinging and unwilling to let go. “I’m accustomed to working with others in my acting, but with music it’s always been only me. And I suppose I ‘m good enough or Teddy wouldn’t have chosen me, but those guys are really good. I’m adjusting, Annie. This is new to me, and I’m finding I still haven’t found that — Is the American word ‘pocket’ ? You know, that place where I fit in.”

Stepping forward, he smiled, too. “Yes, oui. My niche.” He moved closer, then closer — backing her up until she was against the tree trunk. He braced a hand against the rough bark, right next to her head, and his whole system stuttered at the sight of her delicate, tempting body. He wanted to taste it. Assault it. Pleasure it. He wet his lips, then whispered her name, but she stuck to the business at hand.

“You know how it is when you sing?” she asked, trying to maintain some semblance of control. “It’s physical, but you use your other senses, too?”

“Yes. I feel the music and the words before I let them out.”

“Precisely,” she said as he brought his hand down and reached. “Do … that.” He was gently cupping her breast! “Trust … your feelings …” His bold move seared her body with need. “Oh … ” Her eyes slid closed, and she saw sparkles of light: exploding stars. “What are … What are you doing?”

Gabriel’s voice was gruff. “I’ve been watching this leaf that fell on you and waiting for it to fall the rest of the way, but it likes you too much to leave.” He flicked his thumb over her, and the leaf floated away in the air. “There. It’s free.” But he was captive, and he knew: Annie was a battle he was losing. “I am going to have to talk to Teddy,” he murmured, following the slide of his two fingers up and down her bare arm now. “My craving for you is only growing, and I cannot stay away. It feels like you are mine already, and I have a confession to make. I’m jealous of your relationship with the other men.” With slow deliberation, he circled his palm ever-so-softly over her taut nipple as he lifted his long, thick lashes. “If you want orgasms” — he cupped her again — “I’ll give them to you.”

She swallowed. How in the world was she going to fight this? The thought of Teddy and her promise loomed large. “Please stop.”

Bracing both hands on the tree now, Gabriel kissed next to her bruise, then rested his forehead against hers. He struggled to catch his breath. “We’d better go back, then.” With the last ounce of his self-control, he lifted away. “Take me back.”

Annie’s every empty place pounded with building desire, fear of her feelings making her move. Holding his hand again, she started them walking. “Do the job, Gabriel. There’s plenty of time for more.” Still, her eyes were drawn to his sculpted profile. Behind his refined exterior beat the dark warning of an untamed beast, and she was becoming hell-bent to know that part of him, too. With him, she wanted it all. Heavens, she was in trouble. Oh yes, she may not have his worldly experience, but one thing she did know. If she unlocked that door, he’d sweep in and steal her heart away.